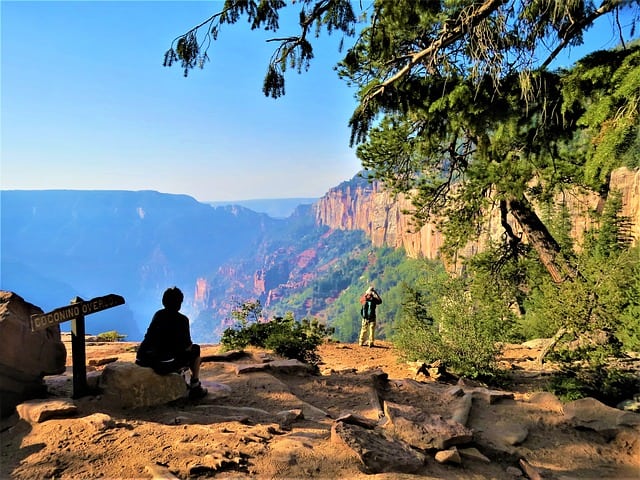 The last time I visited I went to the lesser visited North Rim of the Grand Canyon.  This part of the canyon is further away from Vegas and Phoenix and is only open in the summer.

READ MORE on my site: 15 Grand Canyon Viewpoints on the South Rim

During the season, the Visitor Center is open May 15 through October 15 from 8 am to 6 pm daily.  The North Rim Visitor Centre is closed in winter.

Public restrooms and outdoor exhibits are located behind the Visitor Center building. 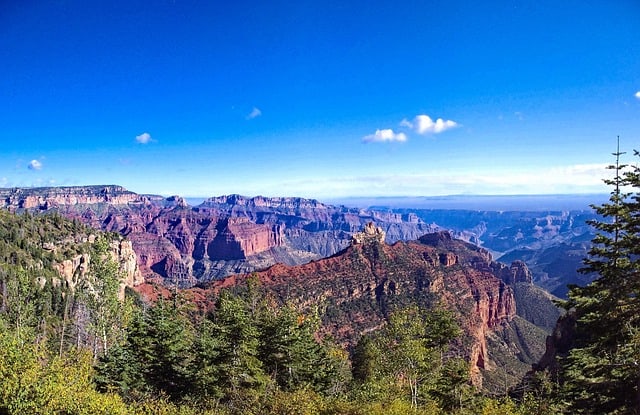 When does the North Rim of Grand Canyon Open?`

The North Rim of the Grand Canyon is only open in summer.  The North Rim opens in mid May and closes in mid October.  This is because it is a full 1000 feet higher in elevation than the South Rim and it receives quite a lot of snow.

What is the Grand Canyon North Rim Elevation? 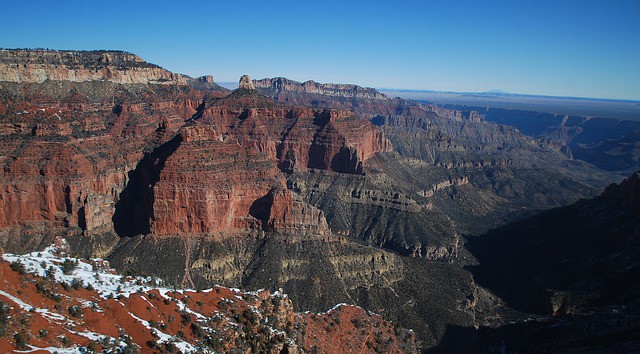 Because of its elevation, the North Rim is about 10 degrees cooler than the South Rim.  It is quite pleasant during the day but it can reach below freezing at night.

Due to the higher elevation you will not see the same bird, wildlife and plant  species in the North Rim.  It’s so quiet there you can actually hear the birds!

Please note at over 8,000 feet in elevation it does get difficult to breathe especially when it is cold.

Point Imperial and Cape Royal are reached via a winding scenic drive. The trip to both points, with short walks at each and several stops at pullouts along the way, can easily take half a day. 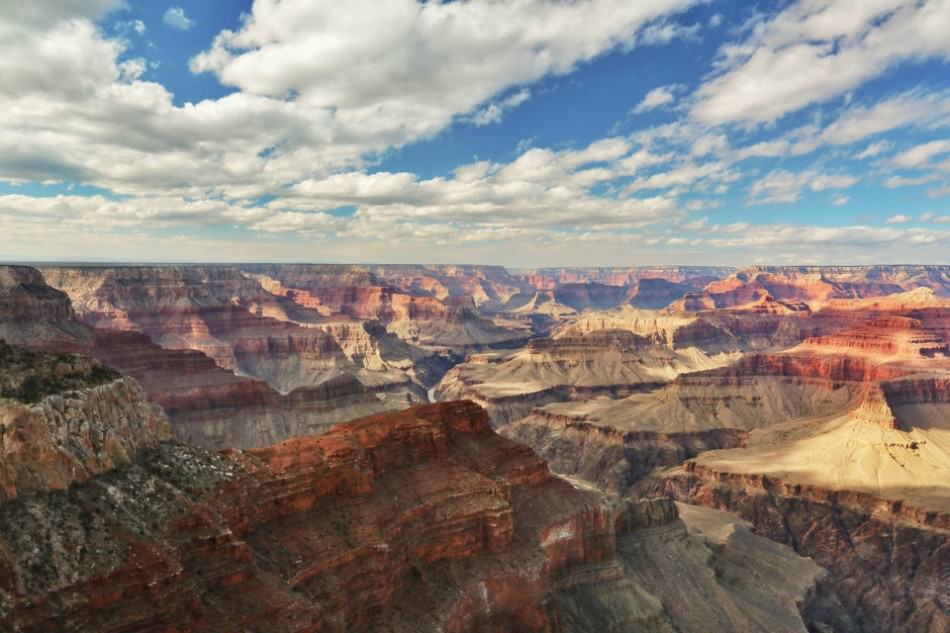 Point Imperial, the highest point on the North Rim at 8,803 feet (2,683 meters), overlooks the Painted Desert and the eastern end of Grand Canyon. Here the canyon transforms as the narrow walls of Marble Canyon, visible only as a winding gash, open dramatically to become “grand.” Layers of red and black Precambrian rocks, not visible at Bright Angel Point, add contrast and color. Part of the viewpoint is accessible.

Cape Royal provides a panorama up, down, and across the canyon. With seemingly unlimited vistas to the east and west, it is popular for both sunrise and sunset. The sweeping turn of the Colorado River at Unkar Delta is framed through the natural arch of Angels Window. Look for the Desert View Watchtower across the canyon on the South Rim. This popular viewpoint is accessible via a paved, level trail.

The Best Grand Canyon View in the North Rim

At the end of a 5-mile hike through mostly level grounds, lies the Windforss viewpoint. Although the Windforss hiking trail offers great but restricted views, the view point definitely does not disappoint. From this point, many parts of the eastern side of the Grand Canyon is visible.

Due to the easy accessibility from the road, the bright angel point is the most popular viewpoint on the north rim of the Grand Canyon. The walk to the viewpoint is an easy stroll along a mostly paved trail. 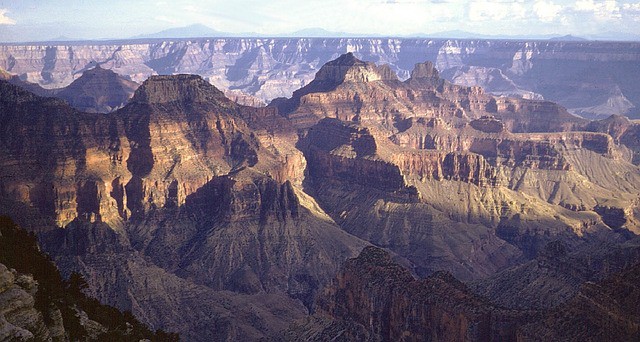 The viewpoint is at an elevation at of 8,148 feet, 1,000 higher than the south rim! Bright Angel Point offers exceptional views of the Bright Angel canyon below as well as a series of rugged points along the centre of the canyon.

The Uncle Jim Point is at the end of a 5-mile popular hiking trail, of the same name. the trail and view point are both named after a former reserve warden who lived on the north rim of the Grand Canyon in the 20th century. James T Owen “Uncle Jim” was responsible for killing over 500 mountain lions, in an attempt to protect the mule deer local to the area.

Located at the end of a 5-mile hike, some argue is the most beautiful viewpoint of the north rim of the Grand Canyon. This is due to the stunning and picturesque views that include being able to see over to the beauty that encompasses the south rim as well as the north rim.

The Cape Royal viewpoint has the widest and best panoramic view of the entire Grand Canyon. It is also located the most southern tip of the North Rim. It is quiet a trip however to get to the viewpoint, including a very narrow and windy road followed by a paved trail that takes you down to the point over looking exceptional panoramic views of the northern rim.

The Cape Final viewpoint offers stunning panoramic views of the eastern side of the Grand Canyon. Due to the lack of trees in the area, the entire view is viewable from one single spot making it stand out from the other points. Similarly, Cape Final is a must visit due to the solitude it offers as many people fail to make it the full 2-mile hike through the forest tracks.

This is a popular view point destination for many tourists due to the easily accessible and flat 40-minute hike through the wooded forest to get there. From the point there are stunning views over the Natchi Canyon, the Lava Creek and the Hartman Natural Bridge.

This is the highest viewpoint on the North Rim, at an elevation of 8,803 feet! Because of this, Point Imperial offers a much different view than any of the other North Rim points. The overlooking panoramic views from below, makes this view unique from the rest and a must visit on your trip to the Grand Canyon!

The Atoko viewpoint is hidden from observers of other points as well as off the road; making it a perfect place if you’re looking for tranquillity as well as beautiful views. The path to get to the point includes an easy straight and mostly flat 1.5-mile hike through the forest.

Roosevelt Point is a recent addition to the North Rim of the Grand Canyon is named after former President Franklin D Roosevelt. The viewpoint is close to the road, making it a semi easy track to the end of the point. Although, due to trees located in the area, the view does is somewhat restricted. However, it does still offer great views over the beautiful canyon.

Toroweap viewpoint offers magnificent views below and is the only point in the Grand Canyon that offers views of the Colorado River. Thus, making it a unique point to any other viewpoints of the North Rim. However, the track to get there is often difficult and requires knowledge of difficult trails and roads. Because of this, it is also often not completed by many people, therefore, offering a tranquil and solitude experience with minimal tourists around.

I truly think the North Rim is often overlooked and the real untouched beauty of the Grand Canyon but I understand why not everyone can visit the North Rim.

Over to you.  What is your favorite viewpoint in the Grand Canyon?  Have you visited the North Rim?  Let me know in the comments below!

Sharing is Caring!  Pin this article to save for later. 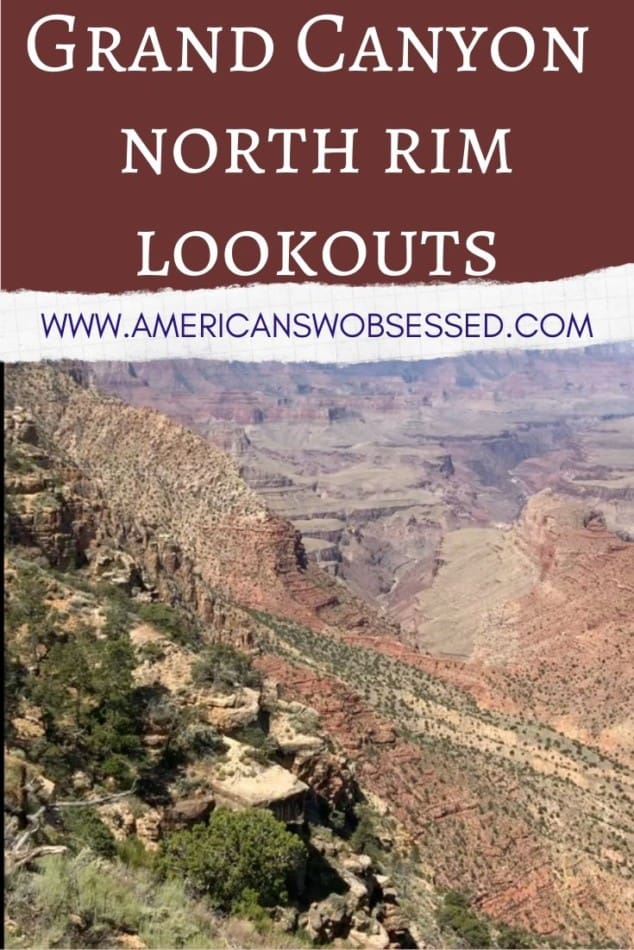 Continue Reading more about the Grand Canyon on my site:

The Best Grand Canyon Viewpoints on the South Rim

North Rim vs South Rim of the Grand Canyon

8 thoughts on “Best Grand Canyon Viewpoint on the North Rim”

This site uses Akismet to reduce spam. Learn how your comment data is processed.

link to 50+ Amazing American Southwest Images You Just Have to See!

50+ Photos of the Southwest Region of the USA As an American, exploring the Southwest is one of my favorite things to do. I've taken so many pictures of the southwest region from the American...

15 CHARMING SMALL TOWNS IN ARIZONA Small Arizona Towns: Are you looking for the best small towns in Airzona? This list has all the best towns to visit in Arizona. A lot of these Arizona tourist...